Help for injured pedestrians in Wilmington, Seaford, Newark, and throughout DE

Walking is good for you – countless experts recommend walking both for our health and as a way to reduce traffic and pollution. Nothing is without risk, unfortunately, and pedestrians need to be aware of their surroundings, especially when walking near motor vehicles. When a pedestrian is struck by a car, serious physical trauma can result, from which it could take months or years to recover.

The Centers for Disease Control and Prevention (CDC) reports that, in 2017, 5,977 pedestrians were killed in traffic accidents. Additionally, another 137,000 pedestrians sought treatment in emergency rooms for crash-related injuries. Pedestrians are also more likely to die in a car accident than passengers in a vehicle.

If you or a loved one were hurt in a pedestrian accident, the Delaware personal injury attorneys at Silverman, McDonald & Friedman can help guide you through the legal process. We can assist you in negotiating with insurance companies for a fair settlement, and are not afraid to go to court on your behalf. Contact us for a free consultation at one of our Delaware offices in Newark, Wilmington, or Seaford to learn more.

Delaware has a great reputation for many things; however, pedestrian safety is not one of them. In fact, Delaware’s been named the deadliest state for pedestrians. Specifically, over three-quarters of pedestrian deaths between January 2005 and December 2014 occurred at night on high-speed roadways. Approximately two out of three deaths were in New Castle County, and in 45 percent of cases, either the driver or the pedestrian had been drinking.

Although any pedestrian can be involved in an accident, the CDC points out that certain groups or certain environments may present a higher risk of being struck by a car:

Car and truck drivers have a duty of care to obey traffic laws and rules of the road, which includes staying alert for pedestrians and bicyclists. If they fail in this duty and drive irresponsibly or recklessly, they can cause car accidents with devastating consequences.

Because pedestrians tend to be less visible to drivers, if a driver fails to stay alert and exercise care, their negligence can result in a serious accident. Examples of common driver negligence include:

The National Safety Council also points toward pedestrians themselves as a cause for some pedestrian accidents. With the vast majority of the population carrying cellphones, the Council warns of the risks of distracted walking: “Stop using phones while walking, and not just in crosswalks and intersections. Over half of distracted walking injuries occur in our own homes, proving that we need to stay aware of our surroundings whether indoors and out.”

What is my pedestrian accident case worth?

If you were injured in a pedestrian accident that wasn’t your fault, you are likely eligible for financial compensation for your losses. You can make a claim against the responsible party for damages, including:

Our Delaware accident attorneys work to ensure victims secure the compensation they’re owed for their injuries and losses. We determine the full extent of your damages and hold the right people accountable.

Injuries from a pedestrian accident can be devastating and life-altering. At Silverman, McDonald & Friedman have the experience and the insight to help secure compensation for your injuries. To schedule a free consultation with an experienced Delaware bike accident lawyer in one of our offices in Wilmington, Seaford, or Newark, you may call 302-888-2900 or fill out our contact form now. 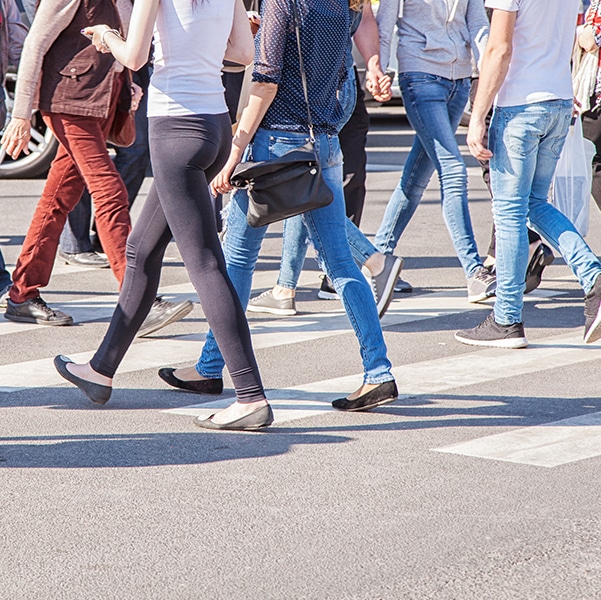